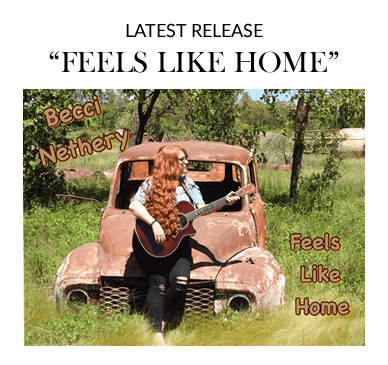 NOW ON ALL PLATFORMS

Becci Nethery is a 25 year old singer songwriter born in Chillagoe in Far North Queensland. At the age of 8 she began guitar lessons from her Grandfather and Auntie and later developed a love for performing. Becci attended St Monica’s College in Cairns and later was accepted into the Academy of Music and Performing Arts (AMPA) in Sydney, where she completed her Bachelor of Contemporary Performance.

Becci now resides in Sydney, where she teaches music to people from ages 7 – 70 and loves passing on her passion for performance and songwriting. She travels all over Eastern Australia for festivals and gigs and regularly makes trips back to FNQ to visit family and perform. (when it’s possible with Covid restrictions)

Beccis brand new single ‘Feels Like Home’ was released in October 2021. It reached #1 on the Australian Country Songs Chart. Produced at the Vault Studio in Sydney, this was the first track lifted from her upcoming third album (of all original songs or co-writes).